I attended part-time Japanese lessons in two Japanese language schools for a total of five years and was very lucky to meet many great Japanese native teachers.

Along the learning journey, my Japanese teachers helped me to build up my knowledge of many basic Japanese grammars, giving lots of examples to enhance the understanding of the many important grammars. 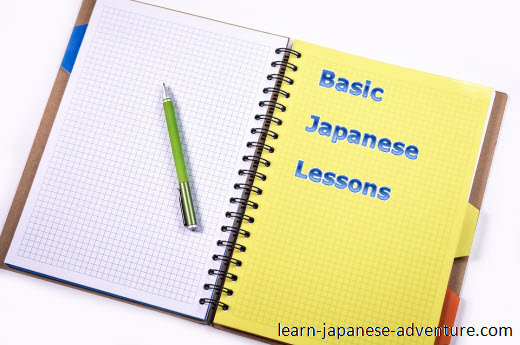 I firmly believe that it's the solid foundation which I had built up in the Basic Japanese courses that helped in the smooth transition to the advanced level without much difficulty.

Wonder how I learned my basic Japanese lessons?

I will organize these lessons in the same sequence as what I have been through which I think will benefit you. Go through all the free lessons to have a good understanding of the basic Japanese.

A good solid foundation of the basics will certainly benefit you when you plan to go a step higher to the intermediate lessons.

If you have not gone through the hiragana lessons yet, please get familiarize first before starting the following lessons.

Following are the Basic Japanese Lessons...

In the first lesson, we will go through together some Japanese Greetings which you can use them to greet your Japanese friends when you meet them. You might have already known some of them.

You will learn to use Japanese nouns to form simple sentences. Some Japanese particles such as topic markers は (wa), も (mo) and question word か (ka) will be discussed here.

Learn how to use one noun to modify another noun in this lesson. There are various meanings when using this sentence structure.

Discover how to connect 2 Japanese adjectives to form a sentence using te-form. Find out how to change to te-form for both i-adjectives and na-adjectives.

7. arimasu and imasu - How to express existence in Japanese?

Do you know how to express existence in Japanese? In this Japanese lesson see how to do that using 2 Japanese verbs あります (arimasu) and います (imasu).

8. How to use Numbers in Japanese?

Study how to incorporate numbers in Japanese into sentences and see how particle と (to) can be used to connect 2 subjects.

Japanese likes and dislikes are actually na-adjectives. See how to form sentences using them. Learn also how to say preference in Japanese.

How to incorporate Japanese time expression into a sentence using Noun sentence or Verb sentence? Check out more in this lesson.

Japanese particles play a very important role in forming a Japanese sentence. However they can be very confusing sometimes. This lesson introduces few of the basic particles.

In this Japanese lesson, learn how to express the approximate Japanese time duration, distance, length and quantity in a sentence and the related question word.

13. Japanese Nouns Part 3 - Actions Before and After Noun

This lesson on Japanese nouns explains the two expressions that specify the actions perform before and after nouns.

In this Japanese lesson, learn to combine Japanese particles か (ka) and も (mo) with question words to form words like something, someone, somewhere, nothing, nobody and nowhere.

Most Japanese particles have more than one function. で (de) specifies the vehicle used, indicates the place where the action is taken, and shows the mean or tool used to perform an action. と (to) is used when taking action with someone.

17. Past Tense of Japanese

Learn how to change to past tense of Japanese verbs, nouns, na-adjectives and i-adjectives. Understand how to get stem of masu-form for verbs.

Get to know the 3 groups of Japanese verbs and how to form them. Learn also the 2 types of speech in Japanese - Polite Style and Plain Style.

20. Japanese Verbs on Give and Receive

In this Japanese lesson, discover how to make て-form (te-form) of Japanese verbs from dictionary-form and see what is the basic function of te-form.

23. Japanese Verbs of Motion and How to Make Request in Japanese

Particle を (wo) is used instead of で (de) for Japanese verbs of motion. Learn also how to make a request in Japanese using te-form.

In this Japanese lesson, discover what are the main differences between Japanese particles は (wa) and が (ga). See how they are used in different sentences.

Know the 2 types of Japanese adverbs, one which can be derived from adjectives while the other one being the regular adverbs.

26. Japanese Past Tense in Plain Form

Learn how to make Japanese past tense in Plain form for verbs, nouns, na-adjectives and i-adjectives in order to make complicated sentences.

27. Japanese Particle と (to) for Quotation

Japanese particle と (to) is commonly used for quotation in a sentence. Find out how to make sentences using it.

Japanese noun modifier is used when you want to describe a noun with more information. Discover the rules to follow when using it.

Learn what are the differences between transitive and intransitive Japanese verbs and how to use them with many examples.

31. Japanese Verbs on State Continuation with Transitive and Intransitive verbs

In this Japanese lesson, learn more about Japanese verbs on state continuation with transitive and intransitive verbs and what are the differences between them.

Not having enough? In the intermediate lessons section on this site there are even more Japanese lessons online prepared for you.

Click Here to Get up to 45% OFF Premium & Premium PLUS plan and be on the fast track to fluency in Japanese.