In this lesson, you will get to learn Japanese past tense in plain style. In lesson 17, past tense of Japanese in Polite style has already been introduced.

You have also learned that Japanese can be divided into 2 types of speech - Polite and Plain styles (or forms) in lesson 18 - Japanese verbs.

Polite style is used when you are talking to:

On the other hand, Plain style or Casual style is used when you are talking to your family members or someone who are very close to you.

You have gone through and learned many Japanese expressions in the lessons so far and most of them are using Polite style.

However, it's important for you to know how to use Plain style in order to make complicated Japanese sentences.

Japanese Past Tense for Verbs in Plain Form

Referring to the following table you have learned before in lesson 18, you have た-form (ta-form) and なかった-form (nakatta-form) for Japanese Past tense for verbs in Plain form.

All you have to do is to replace て (te) with た (ta). For nakatta-form, you can derive it from nai-form of Japanese verbs.

However, there is one exception. For the Japanese verb いく (iku) which means "to go", the ta-form is いった (itta).

The following diagram shows the summary of how to change from dictionary-form to ta-form for Japanese verbs. 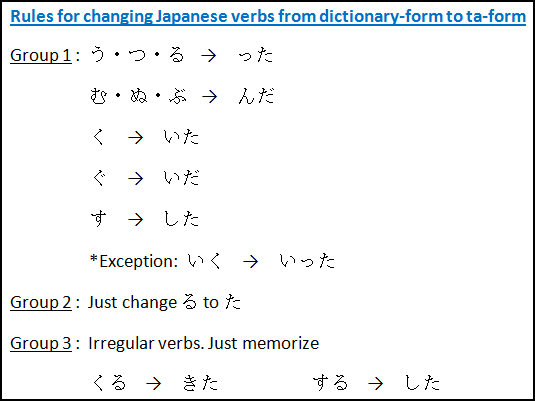 Follow all the rules in lesson 19 on how to change dictionary-form to nai-form. After that, replace ない (nai) with なかった (nakatta) and you will get the nakatta-form for Japanese verbs.

Japanese Past Tense for Nouns in Plain Form

Again, Japanese past tense for nouns in Plain form is quite straight forward. You just need to append different suffixes to the noun as you can see in the following expressions...

Past Tense for na-Adjectives in Plain Form

Japanese past tense for na-adjectives is exactly the same as that for Japanese nouns. Therefore you can simply use the same expressions as the following...

Past Tense for i-Adjectives in Plain Form

Japanese past tense for i-adjectives needs some modifications to the suffixes. For past affirmative form, remove the い (i) in the い-adjective and replace it with かった (katta).

For past negative form, remove the い (i) in the い-adjective and replace it with くなかった (kunakatta).

As for the Plain form for present affirmative and present negative, remove the です (desu) which originally present in Polite style. Check with the following expressions...

You may feel very confusing with so many different forms for Japanese past tense. Give yourself some time to remember the rules and I am sure you will get the hang of it in no time.

Lesson 17: Past Tense of Japanese in Polite style.