You have learned the one function of Japanese particle と (to) when you are taking action with someone in lesson 16.

Another common usage is to use it for quotation in a sentence. That means you are repeating or quoting what another person has said.

Quoting What Someone Said

Therefore to quote what someone has said, you can use the following sentence pattern...

So if Mr Tanaka says something like "きょうはくがつはつかです", you can quote him using the above sentence pattern as...

This is actually a direct speech. What Mr Tanaka just said was put in between the quotation mark 「」.

However, direct speech is usually used in writing and not in speaking because you cannot see the quotation mark when you are speaking.

In speaking you have to use indirect speech to convey what someone has said.

Since you cannot see the quotation mark in speaking, you have to change the sentence of what someone has said to plain form, as shown in the following sentence pattern...

This is one of the very common usage for Japanese particle と (to). You can also see how to incorporate Plain form in order to make more complicated sentence. 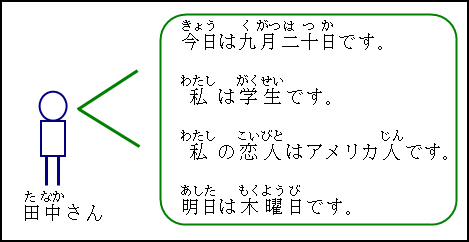 Another Example of Japanese Particle と (to) for Quotation

How do you convey what Mr Tanaka has just said? You probably will say...

The わたし (watashi) in the above example should be referring to Mr Tanaka.

However you are repeating たなかさん (tanaka san) in the sentence which looks very weird and long.

Therefore when the sentence's topic is talking about the same person, you should omit the second one in the sentence. So the correct way should be...

In this case, since the topic of the sentence is about Mr Tanaka's girlfriend and not himself, you cannot omit the second たなかさん (tanaka san) in the sentence.

Therefore you should say the following...

One More Example of Japanese Particle と (to) for Quotation

If you have to quote what Mr Tanaka said today, you should say...

However if you have to quote the same sentence tomorrow, you have to change あした (ashita - tomorrow) to きょう (kyou - today). Therefore you should say...

The time expression will depend on when you quote the sentence.

In Summary, when using Japanese particle と (to) for quotation in a sentence, topic or time expression might need to be changed depending on the situation.

If you want to know more about particles, I recommend you get one of these books on particles.

Lesson 16: Particles to and de.

Click Here to Get 51% OFF Basic, Premium & Premium PLUS plan and be on the fast track to fluency in Japanese.