のに noni is used when what is stated in the second sentence runs against to what is expected from the first sentence. 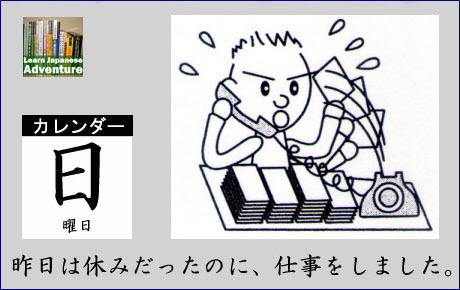 The second sentence carries the implication of unexpectedness or dissatisfaction and it's often used for complaint.

Note: Non-factual sentence like an intention, an order, a request, a permission or a suggestion cannot be used in the second sentence.

Let's look at some examples...

In example 1, the speaker expects that the woman will come because she promised to do so. So he naturally feels disappointed that she did not come.

In example 2, Holiday is normally a rest day, yet the speaker has to work so he feels dissatisfied. The second sentence implies feelings of unexpectedness or dissatisfaction.

ので (node) indicates the cause or reason of certain event while のに (noni) shows the contrary result.

Let's use some examples to show how the result changed using either ので (node) or のに (noni).

In example 2, you rest because it's your rest day. But for のに's case, you went to work instead, showing your unsatisfied feeling.

The rest of the examples also show the unexpected or dissatisfied contrary results in のに's cases.

When translating のに (noni) into English, you can simply use the word "but".

There are some other terms which also carry the meaning of "but", like for example, が (ga) and ても (temo). However, they are being used in different situations.

Let's use some examples to show the difference between ～のに and ～が/～ても.

This is because が (ga) simply joins two different evaluations together and the second sentence therein does not represent an unexpected consequence of what is stated in the first sentence.

Similary, ても (temo) in example 2 cannot be replaced by のに (noni) - "雨が降るのに", the first sentence suggests a possibility, but のに (noni) can only indicate things that have actually occurred in reality (fact).

Let's look at another example.

In the above example, のに (noni) cannot be substituted with が (ga) or ても (temo) - "約束をしましたが" / "約束をしても". This is because the second sentence expresses a strong reproach (dissatisfaction).

Let's practise on connecting the following sentences using either が (ga), ても (temo) or のに (noni). Some of the examples might be able to use more than one of them to connect the two sentences.

Have you figured out which one (or more) to use to connect the sentences? Below are my answers and the explanation on why which one was used (or not used).

In example 1, we are using が (ga) to join two different evaluations together. There's no relationship between the two. Only that one is positive meaning (広い) and the other is negative meaning (暗い).

You cannot connect them using ても (temo) or のに (noni) because the second sentence does not contain contrary result of what is expected.

In example 2, it's not a fact but only a possibility which may happen tomorrow. Therefore only ても (temo) can be used in this case.

が (ga), ても (temo) and のに (noni) can all be used in example 3. However, there are slight differences in terms of the meaning of each sentence, especially the feeling of the speaker.

When using が (ga), you are just describing the fact about your elder sister that she eats a lot but never get fat. There's no personal feeling when you say that.

When ても (temo) is used, you are saying that your elder doesn't usually eat a lot but even if she eats a lot, she won't get fat. You are talking about the possibility.

If のに (noni) is used instead, you are saying that even though your elder sister eats a lot, she never get fat (with some dissatisfied feeling).

Probably you are jealous with your elder sister since you gain weight easily even if you eat a little. You are feeling some unfairness.

Example 4 is a past event on yesterday. Therefore ても (temo) sentence (possibility) cannot be used.

For the sentence using が (ga), you are just describing the fact that you could sleep well although it was noisy yesterday. There is no personal feeling.

For sentence using のに (noni), there is a surprising feeling. You are amazed that you are not sensitive to the noise and could sleep well yesterday.

The event for example 5 may happen in next year which mean it's only a possibility. Therefore only ても (temo) sentence can be used.

In example 6, the が (ga) here is introduction no が (ga), which works as an introduction before you bring out the actual thing you want to say. ても (temo) and のに (noni) cannot be used here.

Lesson 20: Japanese Grammar for Cause and Reason ので (node) Sentence.

Previous - Lesson 35: te-form for Cause or Reason