I have a question about Basic Lesson 19. What is the difference between nai-form and masu-form? And I also don't understand the grouping of Japanese verbs?

As I have already explained in Basic lesson 18, Japanese can generally be divided into 2 types of speech - Polite and Plain styles or forms.

Polite-form is used when you are talking to strangers, people whom you are not close to, or your superiors.

Whereas plain-form is used when you are talking to your close friends, colleagues or family members.

If you are not sure which form to use, it's advisable that you use polite-form.

Basically, both Polite-form and Plain-form can be divided into 4 groups:
1) Present Affirmative
2) Present Negative
3) Past Affirmative
4) Past Negative

To understand these groups better, I have created a picture on the relationship of all the forms for Japanese verbs so that you can understand them more easily. 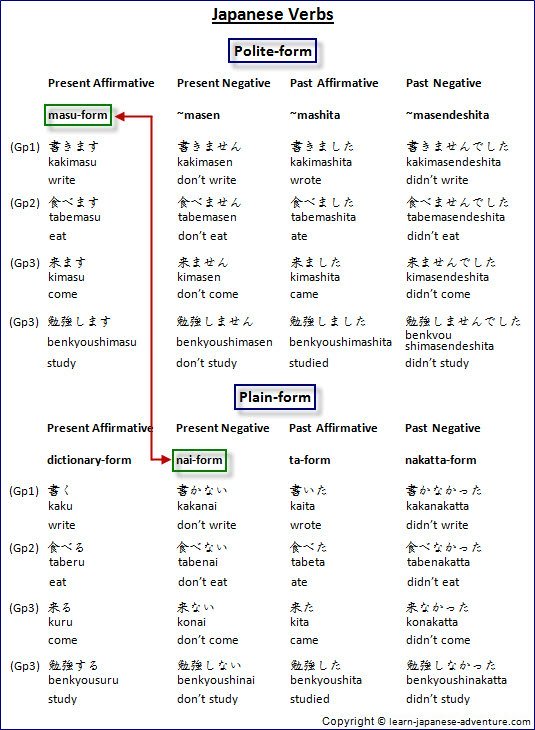 Let's check out the different forms for the Group 2 verb 食べる (taberu) as shown in the picture...

Let's use some examples to show how the above forms can be used. Firstly, we'll use the Polite-form verbs...

4. 子供の時、野菜が嫌いだったので、全然食べませんでした。
kodomo no toki, yasai ga kiraidatta node, zenzen tabemasendeshita
Meaning: When I was a child, I didn't eat vegetable at all because I disliked it.

You can change the above examples into Plain-form by simply replacing the Polite-form verbs with the respective Plain-form verbs.

1. 今日の晩御飯はハンバーガーを食べる。
kyou no bangohan wa hanba-ga- wo taberu
Meaning: I will eat hamburger for tonight's dinner.

4. 子供の時、野菜が嫌いだったので、全然食べなかった。
kodomo no toki, yasai ga kiraidatta node, zenzen tabenakatta
Meaning: When I was a child, I didn't eat vegetable at all because I disliked it.

Therefore, to answer your original question, masu-form is used in present-affirmative sentences for Polite-form. For example, "to write", "to eat", "to come", "to study".

Hope this explanation clears your doubt about the difference between the two forms.

masu-form and nai-form are quite essential in Japanese because many grammars are derived based on these two forms. For instance, たい-form (tai-form) - desire in Japanese is derived from the stem of masu-form. Stem of masu-form is the word before "ます" in a masu-form verb.

To know how to convert from dictionary-form to masu-form and nai-form, refer to Basic lesson 19.

The 3 Groupings in Japanese Verbs

I won't go into the theories of how the 3 groupings in Japanese verbs were formed. You can refer to the page here for more information.

Generally, Japanese verbs can be divided into 3 groups - Group 1, Group 2 and Group 3 verbs. I have explained in details what are the characteristics of each group in basic lesson 18.

Most importantly, you need to learn the different groups of verbs in order to know how to conjugate the verbs using specific set of rules, like some that were explained in basic lesson 19.

As most Japanese sentences end with a verb, it's very important to know the conjugations of each verb to express the correct meaning that you intended.

I highly recommend this book - A Dictionary of Basic Japanese Grammar by Seiichi Makino and Michio Tsutsui if you would like to get a book on Japanese verbs.

Please note that some links on this page are affiliate links. That means I will receive a small commission if you decide to make a purchase through those links, at no additional cost to you.