In this first intermediate lesson, you are going to learn Japanese expression of desire for something (for noun) and desire to do something (for verb). 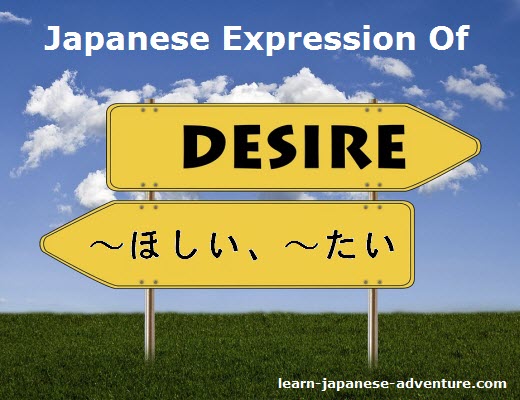 When you desire or want something (noun), the expression used is "欲しい" or "ほしい" (hoshii).

When you desire or want to do something (verb - since it's an action), the Japanese expression "verb {stem of masu-form} たい" (tai) is used.

While there are some other variations and functions for these two expressions such as when describing third person desire, this lesson will concentrate on the basic function of them.

I will discuss the other functions in future lessons.

Japanese Expression of Desire for Something

Let's take a look at the sentence pattern for the first expression...

Take note that this expression is only used for first person, so it's always "watashi wa Noun ga hoshii desu". However "watashi wa" is normally omitted as it's obvious that the speaker is talking as the first person.

Therefore the following sentence is wrong because it's not the speaker's desire...

However you can ask someone (second person) what's his or her desire in a question. So you can use this expression in a question like the following...

In this expression, the thing that you desire (Noun) is marked with the particle が (ga). This is the rule that you have to remember.

For the object Noun, it can be a) thing, b) people and c) time. Let's use some examples to further see how this Japanese expression works...

Negative and Past Tense of ほしい (hoshii)

As ほしい (hoshii) is an i-adjective, the negative form and past tense (affirmative and negative) follow how an i-adjective changes form. Take a look at the following...

Let's make some examples to explain the various forms clearly...

Bear in mind the Japanese expression ほしい (hoshii) is only used for things/objects. You cannot use it when you have desire to do something (action).

A common mistake student often made is the following sentence...

Japanese Expression of Desire to Do Something

Let's take a look at the sentence pattern for this Japanese expression...

Check out the page on Japanese verb stem of masu-form if you are not sure how to form it. Let's make use of few verbs to see how to change into the respective たい-form (tai-form)...

たい-form (tai-form) is also similar to ほしい (hoshii) that it is only used for first person. Therefore it's wrong to say "someone (other than yourself) verb(~tai) desu".

But it's Ok to use it when asking someone "what he or she wants to do" in a question.

For たい (tai) sentence, you can still use the particles as per normal. However sometimes particle を (wo) is changed to が (ga).

It's Ok to use either of them, but most of the time が (ga) is used. Let's check out some examples for this Japanese expression...

Negative and Past Tense of Verb たい (tai) form

Similar to ほしい (hoshii), verb tai-form is also an i-adjective. Therefore the same rule applies when changing form to negative and past tense.

Please see the following for a clearer picture...

Let's make some similar examples as you have done in the other Japanese expression "hoshii" to explain the various forms clearly...