You have already learned たら tara sentence in lesson 27 and 28. In those two lessons, with the following sentence pattern...

...basically you learned about:

In this lesson, you will be learning yet another function of たら tara sentence - Discovery. The sentence pattern is similar, except that Sentence 2 is always in past tense.

Basically you'll use the above sentence pattern in two cases.

First Case to use たら tara Sentence for Discovery

Through the action in Sentence 1, Sentence 2 (what had already occurred or happened) was discovered (surprisingly).

Let's look at one example... 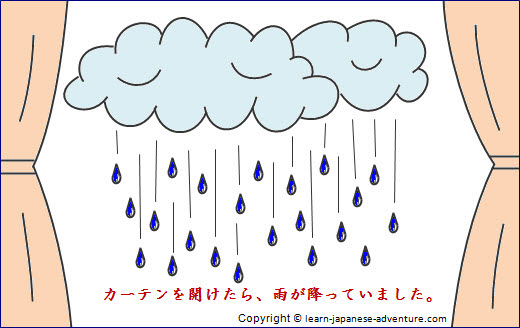 In the above example, both events have already happened.

In the past, I opened the curtain and discovered that it was raining

The dog has already been in front of the door before I opened it. But only when I opened the door, then I discovered that the big dog was there.

The department store was closed today. But I didn't know about that. Only when I went there, then I found out that it was closed.

The lesson had started before I arrived at school. I only discovered that when I reached there.

The letter from my friend arrived before I opened the letter box.

Second Case to use たら tara Sentence for Discovery

Sentence 2 occurred as a result of some action in Sentence 1 (unexpectedly).

Similarly, for the rest of examples, something happened unexpectedly as a result of the actions in Sentence 1.

In the first case of たら tara Sentence for Discovery, it normally delivers a surprise feeling. You discovered something and become surprised.

In the second case, what happened next (as a result of the first action) was unexpected.

In either case, the most difficult part is the regulation you need to take note of when using this sentence pattern.

Intentional acts by the speaker cannot be used in Sentence 2

This regulation is quite self-explanatory because if you have speaker's intentional action in Sentence 2, it's no longer a discovery, nor it's a surprised or unexpected event.

Both events in the above example are facts in the past. I went to Japan last year and I stayed in a hotel.

However, you cannot connect the two sentences with たら tara sentence.

Because the action of staying in hotel was an intentional act decided by you. You chose to stay in a hotel. This is not a surprised or unexpected event.

The above example was just two actions in order of occurrence using て-form. First I went to Japan, then I stayed in a hotel.

Therefore, for たら tara Sentence for Discovery, no intentional acts by the speaker in Sentence 2.