As you have already known, する (suru) or します (shimasu) means "to do (something)". It's normally connected with a noun to form a Group 3 verb.

It can also be combined with い-Adj, な-Adj or Noun to have another meaning which is what you are going to learn in this lesson.

Let's see what are the sentence patterns...

This grammar indicates that someone "turns" or "makes" something into a certain condition or state.

For い-Adjective, you first change it into its adverbial form by replacing the い (i) with く (ku), and then connect it to します (shimasu).

Whereas for な-Adj and Noun, append the particle に (ni) and then connect to します (shimasu). 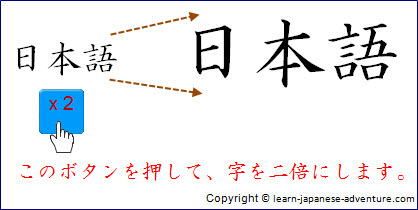 Many people get confused about this Japanese grammar ～くします/～にします with another similar grammar ～くなります/～になります.

The main difference is that ～くします/～にします involves a person who make the action, whereas ～くなります/～になります just describes the change in condition or state.

Let's use some examples to explain the differences between these two Japanese grammars.

In example 1, I didn't physically do anything to shorten the trousers. It becomes shorter naturally after the washing. ～くなります is describing the state of the trousers.

In example 2, the state of the trousers is the same - becomes shorter. However, this change is made by me on purpose. I made the trousers shorter because it was too long.

Another difference to take note of is the particle used in the two Japanese grammars. For the first example, it just describes the state of something with くなります, therefore the particle が (ga) is used.

But when a person is involved for the change of state in the second example with くします, the particle を (wo) is used.

Let say that you visit your friend's house and are having dinner with the family. Your friend's mother serves you a big bowl of rice.

You want to reduce the amount of rice as you know you cannot eat that much. How do you make the request?

The correct way to say it should be...

If you were to use くなります, like the following...

...this is totally wrong. You are thinking somehow like magic, the rice will become less by itself.

There is another meaning for the Japanese grammar Noun に します (Noun ni shimasu). It can also express a selection and/or decision.

Let's look at some examples...