They are both used to indicate that the speaker is making a judgement or guess about what may possibly happen. 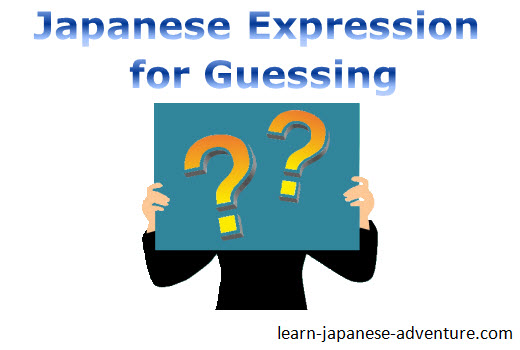 However there are also differences between the two of them. Let's go through them one by one.

でしょう (deshou) is normally used to express the speaker's inference or guess from some information he or she has. The sentence patterns are as follow...

Note: For な-adjective & noun, remove the ending だ before でしょう

For example, after looking at the dark sky, you think that it's going to rain. You can say this...

In fact, でしょう (deshou) is always used in the weather forecast in Japan.

When you are listening to the Japanese news next time, take note of whether the Japanese weathercaster has used this Japanese expression.

Some Points to Note

1. The adverb たぶん (tabun), which means "probably", is used quite often with でしょう (deshou), just like in example 2 above.

3. When you are reading the above examples, the intonation for でしょう (deshou) is going down. However, if the intonation is going up, it becomes a question to someone and you are seeking his or her agreement. For example...

かもしれません (kamoshiremasen) is also used to express the speaker's inference or guess about what may possibly happen, though he or she cannot be absolutely certain.

When the speaker says かもしれません (kamoshiremasen), he or she is also aware that the opposite could be true. The degree of certainty is much lower than that of でしょう (deshou) in this case.

Note: For な-adjective & noun, remove the ending だ before かもしれません

Some Points to Note

1. In example 6, if I were to say 大きい地震があるでしょうから (ookii jishin ga aru deshou kara), it will sound very weird.

It's like I am predicting and are 90% sure that there will be a big earthquake happening and therefore I have to get the insurance.

Although we can't really predict whether an earthquake is going to happen, there is still a possibility that it may happen.

However the possibility is very much lower (may be 1% or lower). In this case, かもしれません (kamoshiremasen) is more appropriate.

Differences Between these Two Japanese Expressions

Although both Japanese expressions でしょう and かもしれません are guesses, the degrees of certainty are different.

でしょう is often used for prediction of future event.

In summary, depending on the situation that you are in, learn to use these two Japanese expressions でしょう and かもしれません correctly.