In Japanese, we often use すぎる sugiru or すぎます sugimasu to indicate that the degree of an action or a state is excessive. 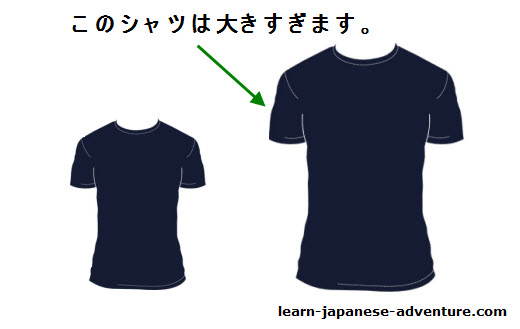 In this lesson, you'll get to learn how to use this Japanese grammar to show that something (action or state) is too much.

It's often not so good to overdo something. Therefore, すぎる sugiru is usually used in reference to undesirable states.

Let's look at the sentence patterns of this grammar...

Note that after converting to すぎる sugiru, the result becomes a Group 2 verb and therefore conjugates in the same way.

In Example 1, if you ate the same amount of hamburgers and you're feeling OK, you can say 沢山食べました (takusan tabemashita - ate a lot).

However, if you feel like vomiting or if you're feeling bad after eating, you're definitely eating too much. Then it's better to express your negative feeling using 食べ過ぎました (tabesugimashita).

In Example 2, if you drank the same amount of wine and you're feeling fine, you can say 沢山飲みました (takusan nomimashita - drank a lot).

However, if you cannot stand up anymore and somebody has to bring you home after drinking so many bottles of wine, you're drinking too much.

To express the negative feeling, you can say 飲みすぎました (nomisugimashita).

Similarly, in Example 3, if you sang for the same length of time and still felt alright, you can say 沢山歌いました (takusan utaimashita - sang a lot).

However, if you cannot speak and talk the next day after singing for so long, you're singing too much. Hence, to express the negative feeling, you should say 歌いすぎました (utaisugimashita).

However, if it's too long that you cannot wear it unless you make some alteration, then you should say このズボンは長すぎます (kono zubon wa nagasugimasu) to express your negative feeling.

You can convert すぎる sugiru to nouns but that's only for verbs.

Normally when you want to convert a Japanese verb into a noun, you add こと (koto) after the dictionary-form. For example...

But with the above sentence pattern, you can say...

It really depends on the speaker's personal feeling to use すぎる sugiru.

If there're 2 persons A さん and B さん. A さん is poor and B さん is very rich. Suppose both of them have $500 in their wallet today.

For A さん, he will probably say 今日はお金を沢山持っています。 (kyou wa okane wo takusan motte imasu - I have plenty of money today).