You may have come across potential form (or potential verb) in Japanese if you are at the intermediate level. It's one of the 2 ways to express ability and possibility to do something in Japanese.

Another way is to convert a verb into its noun-form and append ができる (ga dekiru) to it.

It's very simple to convert a Japanese verb into its noun-form. To do that, simply append こと(koto) to the dictionary-form of any verb.

By appending ができる (ga dekiru) to a noun or a verb in its noun-form, as shown in the following sentence patterns, you can express the ability and possibility of performing an action.

Note: Only noun that is able to connect with する (suru) verb can be used here.

Let's use some examples to show how to use the above sentence patterns...

To express ability or possibility, we have one more expression... Potential verb or Potential form. The meaning of "can" has already been included in the verb without using できる.

The following are the rules for the 3 groups of Japanese verbs.

To change group 1 verbs to potential-form, change the u-sound to e-sound in the last word. After that append る (ru) to the changed words and you will get the potential-form of the verb.

Changing group 2 verbs from dictionary-form to potential-form is much simpler.

I will use another example to show the change. This group 2 verb ねる (neru) means go to bed. Change る (ru) to られる (rareru) and you will get ねられる (nerareru).

Group 3 verbs are irregular verbs. You just have to memorize them.

In summary, the following diagram shows the rules when changing dictionary-form to potential-form for Japanese verbs. 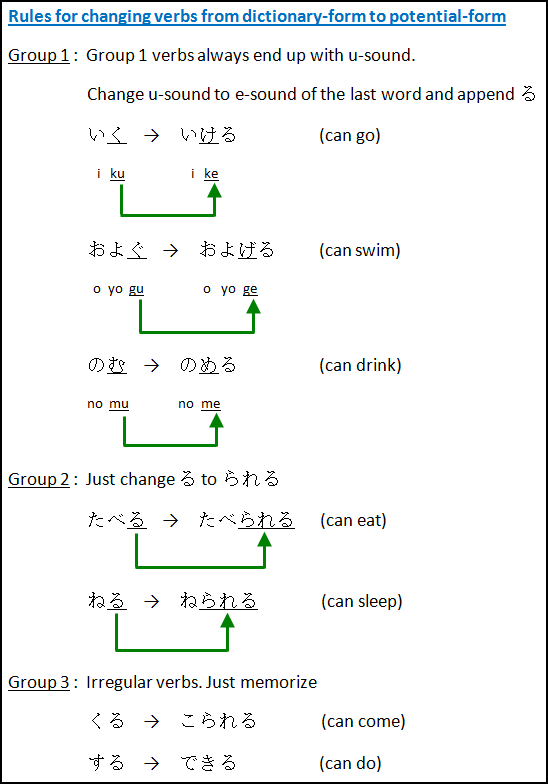 So you have 2 ways to express the meaning of ability or possibility in Japanese.

For example, the following 2 sentences mean the same thing... "I can speak Japanese".

Note: When using potential form, you have to change the particle from を (wo) to が (ga). This was what I were taught by my teacher in the beginning. However, I later found out that this is not always the case. Depending on situations, を (wo) can also be used.

We were told to use が (ga) because our teacher didn't want us to be confused when we were first learning the potential form. So in this lesson, I will still use が (ga) for the particle.

For example, using the potential verb 話せる (hanaseru), which means "can speak"...

Potential verbs can also be applied to the polite style. Using the same example,

Let's practise using both ways to express ability or possibility with more examples...