In this lesson you will get to learn the Japanese grammar used to express your intention of doing something.

Be careful that since these grammars are used to express your own intention to do something, you cannot use them to express intentions of other people.

This grammar is often used to express definite intention or firm determination of the speaker. The sentence patterns for this grammar are as follow...

Meaning: I intend not to do ~.

For example, you can say this...

You can say the above since it's just your intention only. However if you are 100% sure that you are going, you will normally say this instead...

And if you intend not to go anywhere, you should say this...

Let's use another example that uses this Japanese grammar...

This Japanese grammar is also used to express speaker's intention.

Meaning: I am thinking of doing ~.

Using the same example of intending to go to Japan, you can say the following sentence...

The following are the rules for the 3 groups of Japanese verbs.

To change group 1 verbs to volitional-form, change the u-sound to o-sound in the last word. After that append う (u) to the changed words and you will get the volitional-form of the verb.

Changing of group 2 verbs is always much simpler as usual.

All group 2 verbs end up with る (ru). To change to volitional-form, simply replace る (ru) with よう (you) and you will get the volitional-form of the verb.

Let's use another example to show the change. This group 2 verb ねる (neru) means go to bed. Change る (ru) to よう (you) and you will get ねよう (neyou).

In summary, the following diagram shows the rules when changing dictionary-form to volitional-form for Japanese verbs. 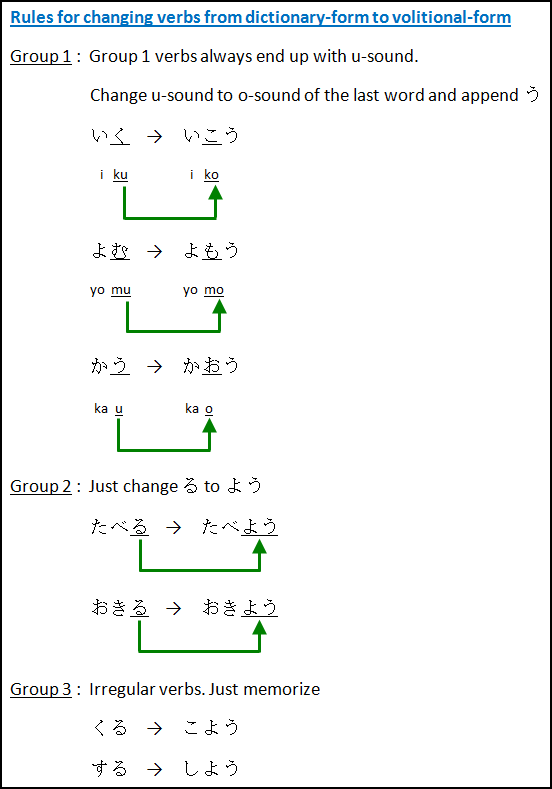 Let's make some sentences to express your intention of doing something using this Japanese grammar (volitional-form). See how each verb was changed to its volitional-form.

Be Careful on Question Using the Japanese Grammar for Intention

If you want to ask someone if he or she intends to go to Japan in this summer holiday, it's natural that you will say this...

However, it's definitely not a good idea to ask questions on what other people intending to do in these ways.

Because these questions contain meanings like "What are you up to?" or "I know what you are going to do something. How dare you do do such a thing?".

It's more like questioning other people intention rather than your original meaning of "if he or she intends to go to Japan".

It's considered rude to ask questions in these ways. Therefore please refrain from asking questions using the Japanese grammar for intention.

If you really want to ask someone's intention, ask the question using the present tense like...

And if that someone has the intention to go to Japan, he or she can answer you using つもりです (tsumori desu) or volitional-form.