In this lesson, you will get to learn another Japanese expression - ようです (you desu).

Some people may mixed up this expression with そうです (sou desu), or 目の"そう" (me no "sou"), which you have learned in lesson 19. However, they are two different expressions.

When the look of a thing leads you to make a guess, you state your guess using 目の"そう" (me no "sou"). You make the guess after looking at the appearance of a thing although it has not confirmed for a fact.

Japanese expression ようです (you desu) conveys the speaker's subjective conjecture, which is based on the information obtained through his or her sensory organs.

The difference between these two expressions will be explained further using some examples.

As usual, let's check out the sentence patterns first...

Let's see how to use ようです (you desu) with an example...

Based on the big crowd that you saw at the cross junction, you deduced that there's been an accident.

Sometimes you might want to begin your ようです (you desu) sentence with the adverb どうも (doumo) which suggests you cannot be certain if what you are saying is a fact. For example...

It's common that people get confused between そうです (sou desu) and ようです (you desu). Let's use an example to differentiate this two Japanese expressions.

In example 1, it indicates an intuitive judgement based on what you have seen of your teacher's condition or behaviour.

In example 2, it indicates your judgement based on what you have seen, read, heard or been told about your teacher.

The important distinction is not the sense which is being used, but rather that the former is based on direct observation and the latter is based on inference.

Sometimes you can use Noun のようです (Noun no you desu) to describe something by using thing similar to it. It's often used in the following sentence pattern... 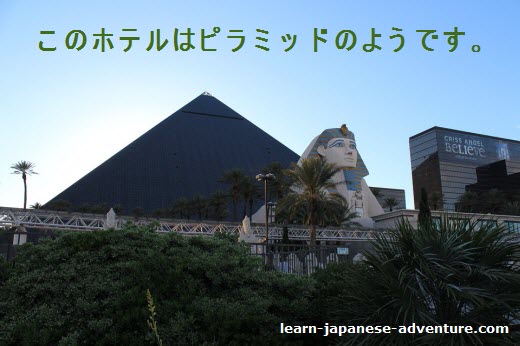 For example, if you want to describe a hotel you saw in the newspaper, you can say...

It will be difficult to describe the shape of the hotel. But if you describe it as similar to the pyramid, it becomes easy to understand. Let's see one more example...

Again, it's not easy to describe a person's hair. But if you say it looks similar to that of a lion, immediately people can imagine the image of that person's hair and understand your description.

When you want to describe one particular noun, you can use Noun のような Noun (Noun no you na Noun). Using the previous examples...

When you want to describe somebody's action or describe the adjective, use this Japanese expression Noun のように Verb/Adjective (Noun no you ni Verb/Adjective).

For example, if you want to describe how good a man is at swimming, you can say this...

You can describe in many ways how good or how fast the man can swim. But the best way to describe is he swims like a fish. People will then know how good he is at swimming.

Similarly, you can describe in many ways how cold the water is. But the best way to describe is that the coldness is similar to that of the ice. Then people can get the idea of how cold it is.